12. In what story did you feel you did the best job of worldbuilding? Any side-notes on it you’d like to share? 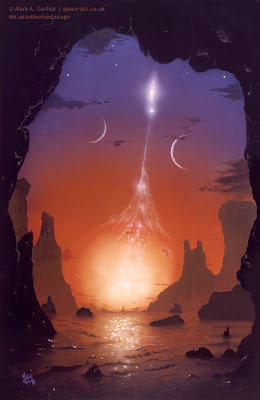 I can’t really call my Myste setting the best job of world building. First of all, it’s not really a world, it’s more the space between worlds, and second, it keeps changing. I did a decent job world building in my trunked fantasy novel, but I’m saving it for my answer for day 14. ;-)

Even though a lot of my stories are set in space, they don’t just revolve around a single world, there’s always a bunch of worlds involved. The trick is to treat each world like a character – they can have similarities, but they also have to be individual enough to stand on their own.

So in answer to the question, I didn’t just build a world, I built a whole universe. Right now I have two novels set in this universe, one is last year’s Nano novel, and the other is my on-line serial. They are two entirely separate stories, but indirectly they’re fighting for the same cause, and you never know, there’s always the possibility that the characters could meet up . . . some day.

Even though my romances have a science fiction setting, there’s just enough fantasy thrown in to keep it from dipping into hard science. I do not have a scientific background, not in any way, shape, or form. Sometimes it can be a challenge to get your point across without becoming too technical, but I think, for the most part, I succeed. Guess all those years of watching Star Trek reruns has paid off. :-)

If you'd like to take part, or just see the whole list of questions, go HERE
Posted by C R Ward at 11:51 AM

Email ThisBlogThis!Share to TwitterShare to FacebookShare to Pinterest
Labels: 30 days of questions, day 12