I was surfing around facebooking procrastinating doing important stuff on the computer and suddenly realized that if I could manage to write 4000 words today, I'd be right on track for NaNo again.

I thought I'd take a little break and post the cover and description of the NaNo novel I'm working on. This is actually the prologue for the novel. I'm thinking I need to give the Old Race a proper name. Maybe I might have to have a contest of some kind . . . I'll give it some thought and get back to you.

In the meantime, enjoy the prologue and the cover art.

In the history of the Old Race, before the Confrontation Wars, the Ashardean Silversouls began receiving portents of disaster. There were visions of a new race of beings invading the galaxy; beings terrible in their ability to fight – beings without conscience and without mercy.

They did not know when this would happen, only that it would happen. There would come a great conflict between The Great Betrayer and The Great Savior that would decide the outcome of known space.

The Old Race had been in existence since the dawn of time, so legend had it. They were the peacekeepers, the keepers of knowledge. They were long-lived, but not prolific. The Silversouls could only tell them that their knowledge would be needed were the human population to survive; they could not divine whether or not the Old Race itself would survive.

And so the Old Race began amassing knowledge. They built a repository for this knowledge on a barren moon and this place became known as the Great Temple. Five keys to the temple were fashioned out of virgin firestone and all five were needed to unlock the temple. Each key had a guardian, culled from five different points in time and space.

Having taken what precautions they could, the Old Race sent the moon off on a journey through space, knowing that even if they did not survive, the repository would. To keep the knowledge safe, all details of the Temple, the Keys, and the Guardians were expunged from all records, save for a series of riddles kept under lock and key.

And so the years passed. 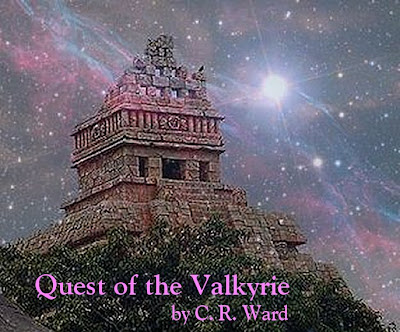 That sounds really interesting! Right up my alley for sure, anyway.

4k in a day is daunting, but doable. Best of luck!

Love the prologue too...very cool. *scribbles the title on my TBR list* There - I saved you another spot on my bookshelf. ;-)

LOL Don't hold your breath. This one is really bad. That's not to say I'm going to abandon it once it's done, I just won't be getting to the editing any time soon.:-)