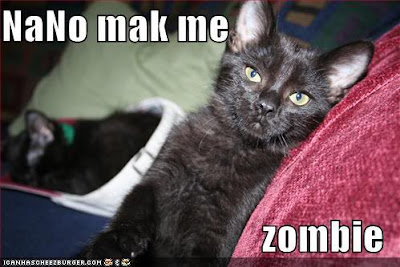 As you know, if you read the post below this one, I've jumped ship with my NaNo idea from the SNI to the OI. So far I've done 7,000 words in 2 days so I think there's a good chance I will not only catch up, I will actually be able to finish with this story.

Anyway, this story is along the lines of my space opera (which you can still catch on my other blog for the month of November), only this is set way before it. It's seven years into the Kohl-trin/human war and follows the firefighter class starship Valkyrie on it's quest for a repository of knowledge that may swing the war in the human's favour.

In this scene we have three of the main characters going behind enemy lines to retrieve some important information from the Hall of Records on Agon, which is the home world of the Old Race.


They were finally out of visual contact with the Valkyrie. Skyler put the Sunstar on automatic and he and Bran joined Calandra in one of the aft compartments.

“The last transmission we had from the Valkyrie said that even with their long range scans there was no sign of a Kohl-trin ship in the area,” Bran told her.

“Let’s not thank our luck yet,” she replied. “I’m sure they’ll have an outpost on Agon. We’d better start hoping they aren’t immune to jamming.”

“Have you pinpointed the exact location of the catacombs?” Bran asked.

“Yes.” Calandra sorted through the ancient charts beside her and handed him one. “This one should give you all the information you need for navigation.”

He thanked her and disappeared forward again.

“How long until we reach Agon?” she asked Skyler.

“Three days. The Sunstar’s a fast ship. We should be all right provided our jamming equipment does its job and we don’t come close enough to the Kohl-trin for visual contact.”

“You worry too much. You should have been a diplomat.”

“You’re forgetting,” he answered. “I almost was.”

“Ah, that’s right. You ran away and joined the scouts instead. Have you ever worked things out with your father?”

“My father is not a very forgiving man, especially when all his well-laid plans come to nothing.”

After a moment’s silence Skyler spoke. “Is it hard going back to your home world?”

“How did you know it was my home?” she asked, astonished.

“We special status people have our methods,” he said with a grin.

“Hmph. To answer your question, yes, it is hard. But well worth it if I can find any information about the keys.”

“Have they seen us yet?”

“Good, let’s get that asteroid between us and them.”

They maneuvered the craft behind the asteroid, keeping it between themselves and the Kohl-trin ship. A second ship appeared.

“It’s our only chance. We’re small, if they aren’t looking for us they might not notice an unusual rock formation on an asteroid.”

They landed, they waited, they watched, they sweated. One of the ships drew closer.

“Shut down all systems, including the jammer,” Skyler said.

“Why?” Calandra asked from behind them where she was watching.

“To keep them from coming closer. If we shut down all systems we don’t need the jammer. If nothing’s jamming their signals there’s no reason to investigate.”

“How long will our air last?” she asked.

“About seven hours,” Skyler told her. “Let’s hope it doesn’t take them that long to give up.”

It took a little less than two before they felt safe to move. Bran turned the scanners on first, making sure the Kohl-trin ships were well away. The coast was clear and they quickly switched everything else on and lifted off.

“That’s the trouble with a jammer,” Skyler said. “It jams our own equipment as well as everyone else’s.”

If you'd like to read another excerpt, you'll have to go to my other blog.
Posted by C R Ward at 8:00 AM